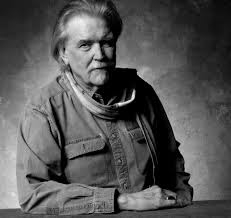 Ain’t no chance if you don’t take it.” – Guy Clark

by A. Michael Uhlmann

Texas singer/songwriter legend Guy Clark passed away today, he was 74 and was in ill health for some of the last years.
I will not even try to attempt to write an obit on this master of words, there are only a few in this world, who have (had) that craft of writing. Hank Williams comes to mind, a big influence for Guy, whom he celebrated in his composition “Hank Williams Said It Best,” his old friend the late Townes Van Zandt as well as John Prine and Leonard Cohen.
The only thing I would love to share here, are a couple of personal memories. An after hours night of pickin’ and grinnin’ at the Singer/Songwriter Festival in Frutigen in 1989. After a great night of fabulous live performances, we (a radio friend of mine, the promoter’s daughter, Billy Joe Shafer and his son Eddy as well as Johnny Rodriguez) all

landed in one of the hotel rooms. Being in a mountain valley, “far” from any major city we weren’t able to score any party accessories, so we had to pass the night by listening to songs, which was as a natural high as they seldom come.
Fast forward several years to 1997 – attending Jack Ingram’s record release party for “Livin’ Or Dyin'” for Rising Tide Records (by then an MCA imprint) at Iron Works Barbecue in Austin during SXSW -Guy Clark was attending, because Ingram had covered “Rita Ballou” for his third studio album. Enjoying the lovely spring sun, my ex-wife and I joined by Guy were standing outside, smoking. At one point we were all considering to go inside to rub elbows with some of the producers, label-head Tony Brown and other people being present, but Guy insisting to just have another smoke. In the end all of the label royalty showed up on the terrace to say hello and pay homage to Clark. After some pleasantries, they all went back inside, while we kept smoking, laughing and exchanging old stories.
You may wonder what that old defunct motel sign is doing here, two years ago on a working trip I actually visited Guy Clark’s hometown Monahans in West Texas. The Sunset Motel has definitely seen better days and even though the town was booming, there was not a room to be found, because of the oil price surge, it had a forlorn feel to it.
As the quintessential Texas tune smith, there are several obits out there worth reading – the main one in my honest opinion “He Ain’t Going Nowhere,” published by Texas Monthly magazine four years ago. It’s an intimate read, perfectly showing Guy’s personality. Rolling Stone magazine offers: Guy Clark: 12 Essential Songs, which is worth visiting as well.
Two of my favorite Guy Clark songs need to be added here, as a European transplant in Texas an ode to the culinary values of the Lonestar State, “Texas Cooking” and a song Guy wrote with his late wife Susanna and another Texas master poet, with Richard Dobson, “Old Friends”
Texas Cooking